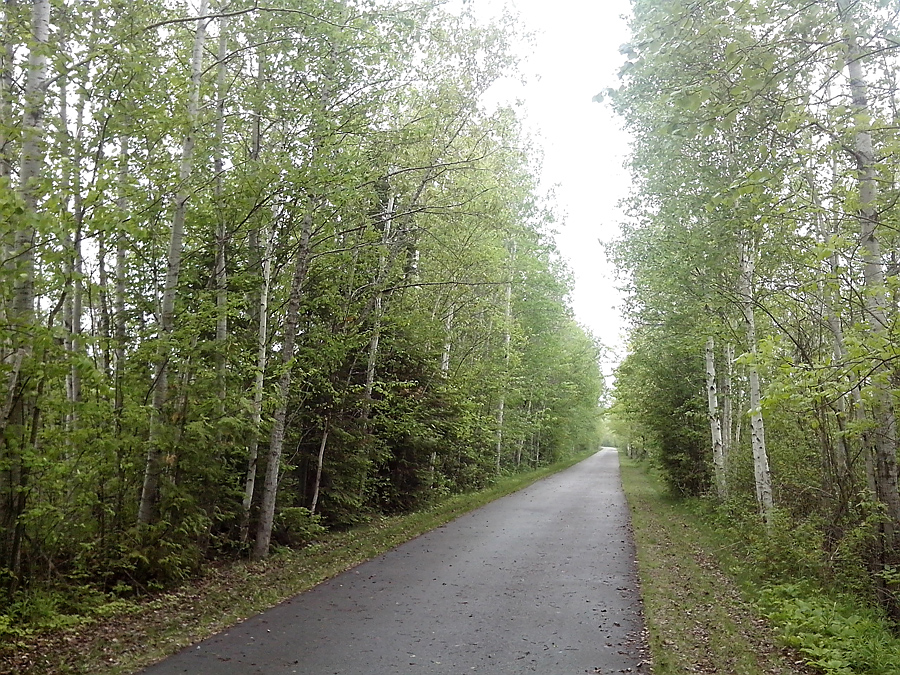 The southbound ferry from Mackinac Island dropped me at Mackinaw City (same pronunciation), and after a few city blocks I was on the North Country Trail. If you like long distance hiking, you can look this trail up, because it’s a big project in these parts. It took me right to the lake. 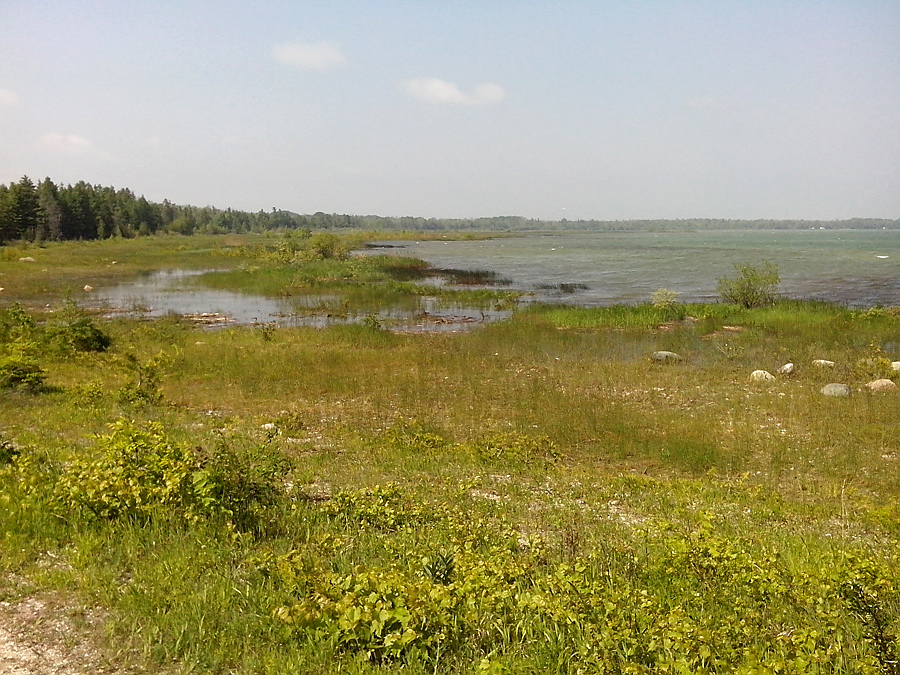 After the long main highway stretches of the Upper Peninsula, the LMT is now back to back roads and trails, lake views and forests, with few cars and bird songs and, essentially, cycling nirvana.

I was overtaken by James Pabell, riding a recumbent trike because he has back problems on a regular bike, a story I’ve heard before. He’s from Indiana, on an 8-day trip with his wife driving the car. 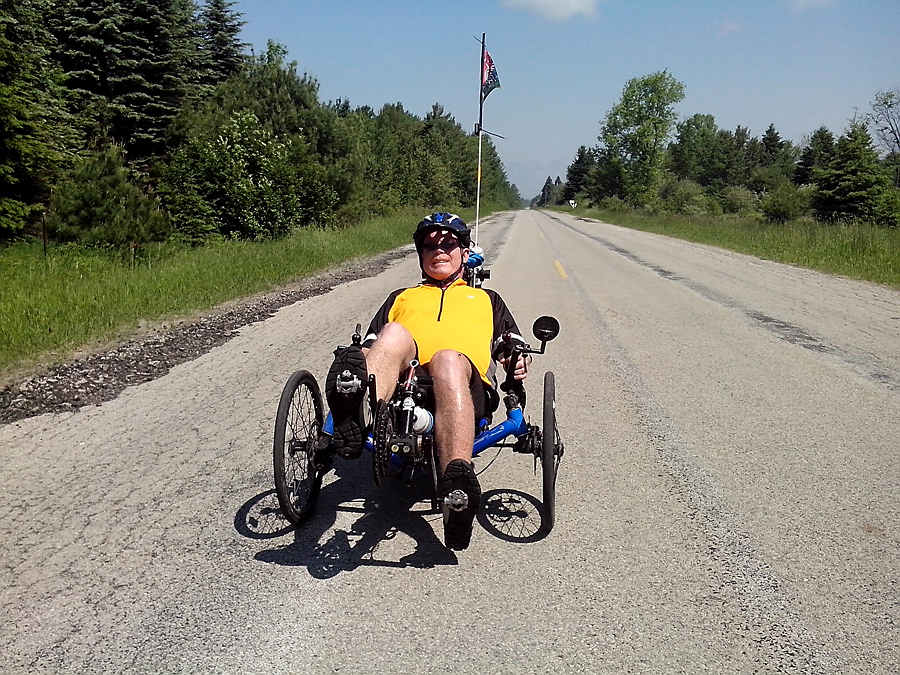 There’s a stretch of about 30 miles on the bluff above the lake, through woods, a part of which is officially signed as The Tunnel of Trees. It’s on some kind of national list of scenic routes, which just shows you how desperate people are to have a list of things to get out and see. 🙂 I’ve therefore included two pictures for you to see for yourself. 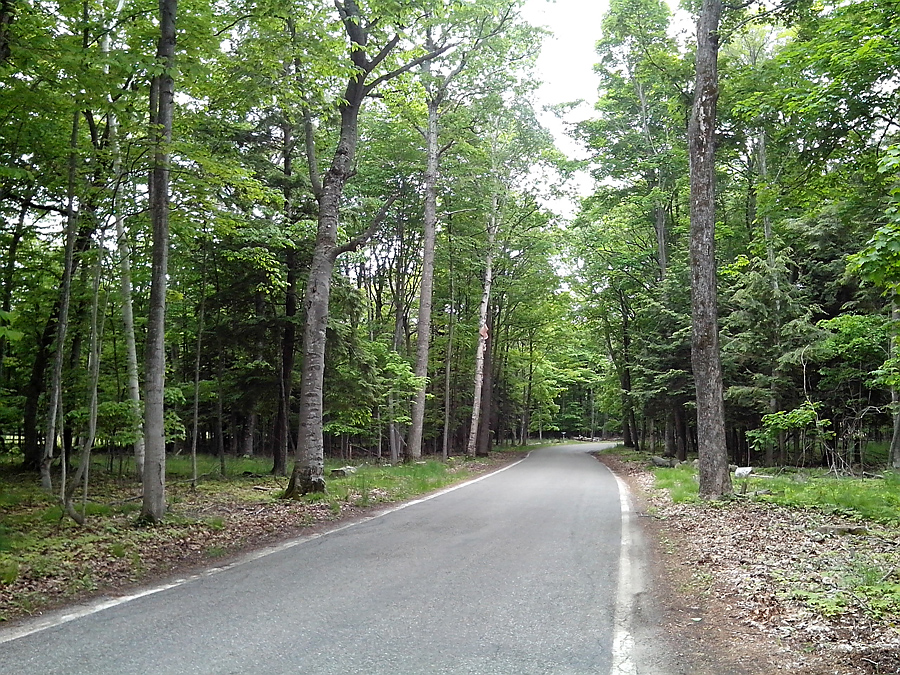 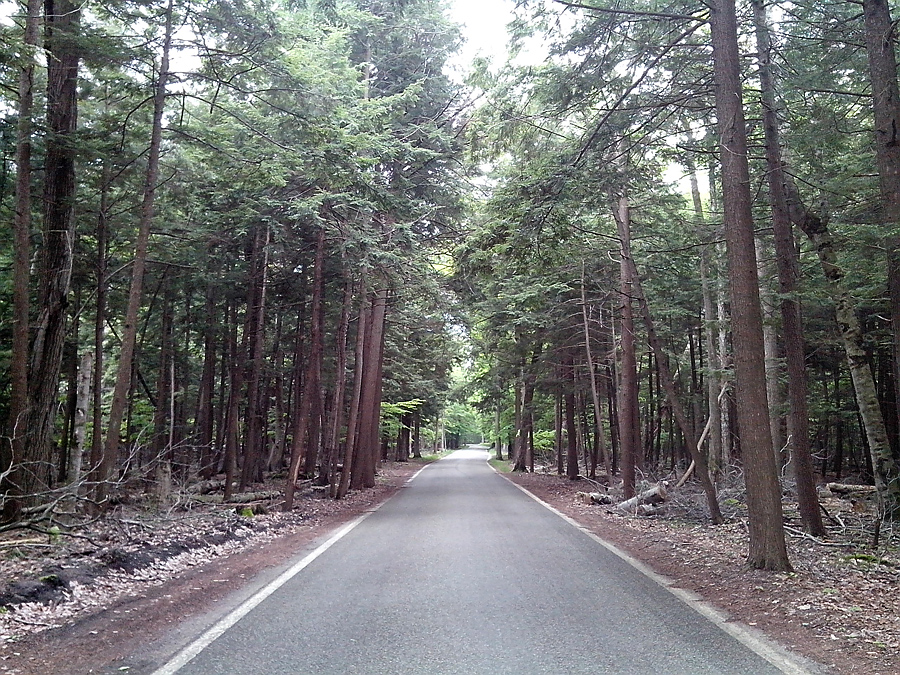 Any dense forest on Vancouver Island or near you, if there are any left, will give you the same effect, and let’s face it, if you’re confined in your car it’s all just a blur anyway, even at a speed limit of 25 – 35 mph. So no need to feel like you’re missing out there at home.

On the other hand, and it’s a big other, to roll through this on a bicycle under my own power, was cool. Thirty miles (about fifty km) of winding road, trees, birds, silence and cool air, made my day.

I missed what I’m told is a great restaurant, and had hot cheesy potato soup at the Good Hart General Store instead. 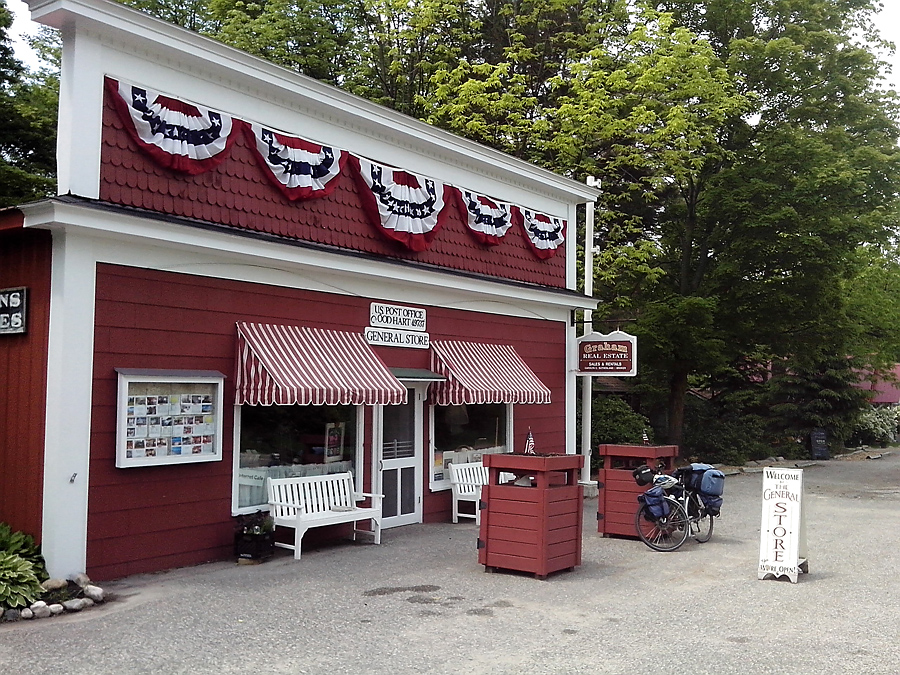 After this, there were more populated areas with cabins, if buildings listed for sale at $600 – 950,000 can be called cabins. They are up a bluff and across the road. And they need steep stairs of 100+ feet for their private lake access. 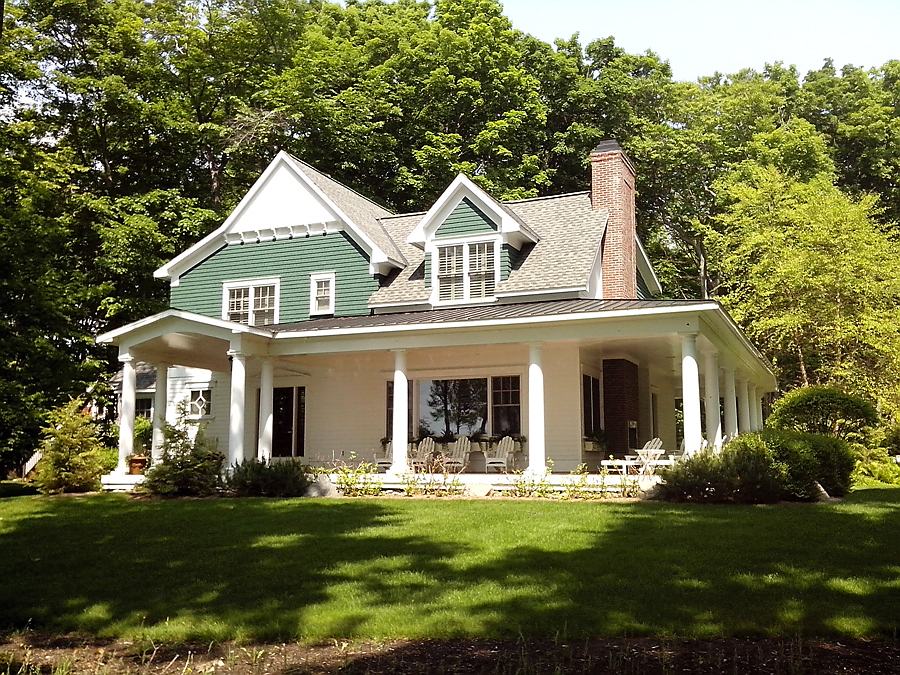 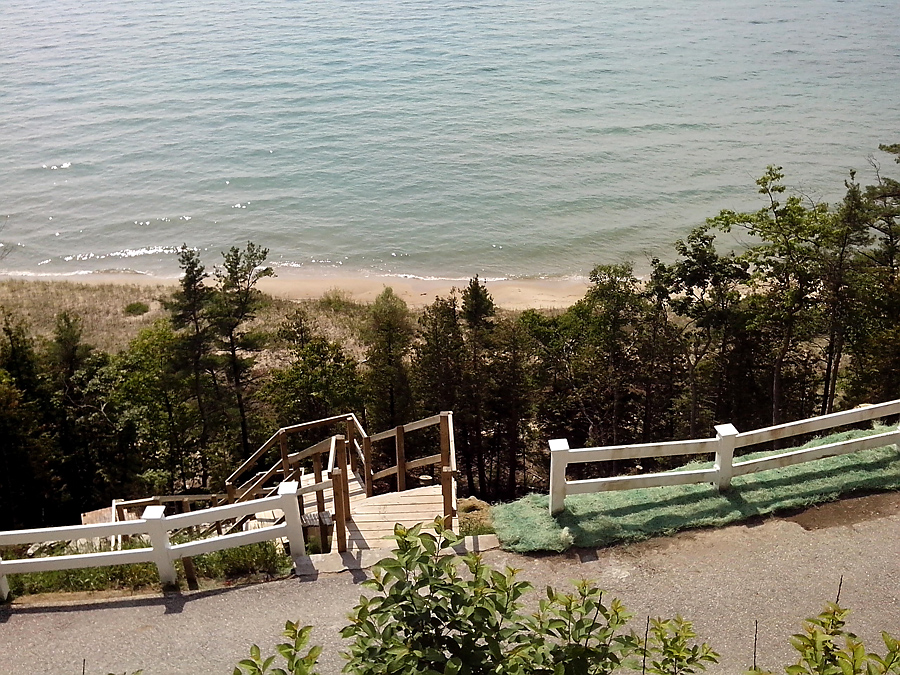 Usually my brain is blank and in the moment out here, but I wondered about so many people who would want to be on their own out in the woods, isolated from neighbors. A local woman later told me that these are summer places, that most are empty all winter, and rich people from afar like the woods, and have the marina, golf course and restaurants as their social contact. The population of the lakeshore communities triples in the summer, and this entire eastern shore of Lake Michigan is vacation country.

Summer makes up for the two months of minus 20 F they had last winter, starting in November.

OK, back to my ride. I had a snack in the first of the lakeshore towns, Harbor Springs. 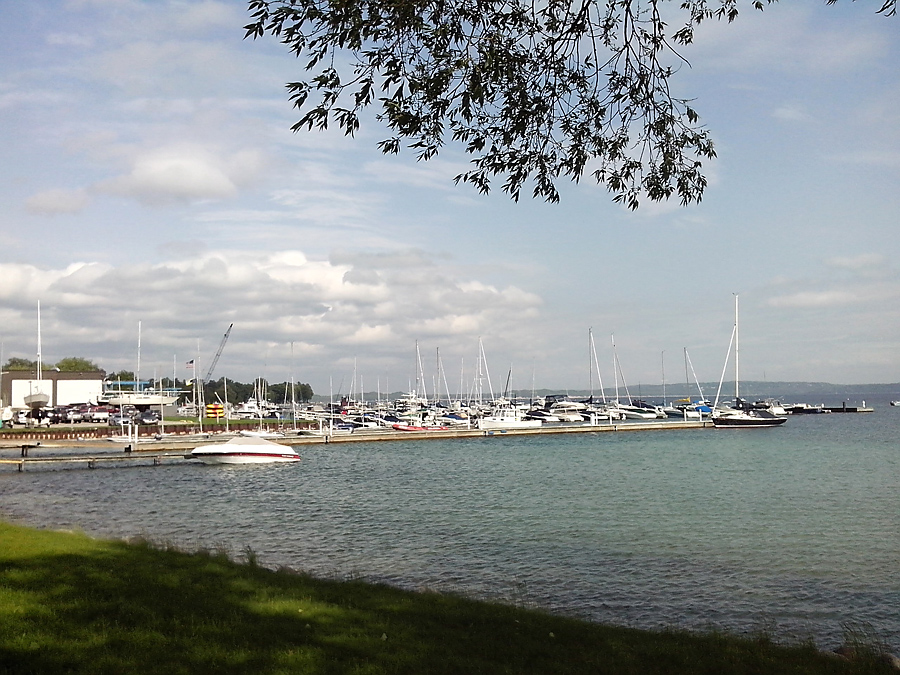 Another solo self-supported rider on a 4 week tour from Minneapolis, through Mackinaw and back to Columbus, Ohio, stopped to talk. She travels light and mails herself special foods (like the Nuuns tablets I use) to local post offices along the way. 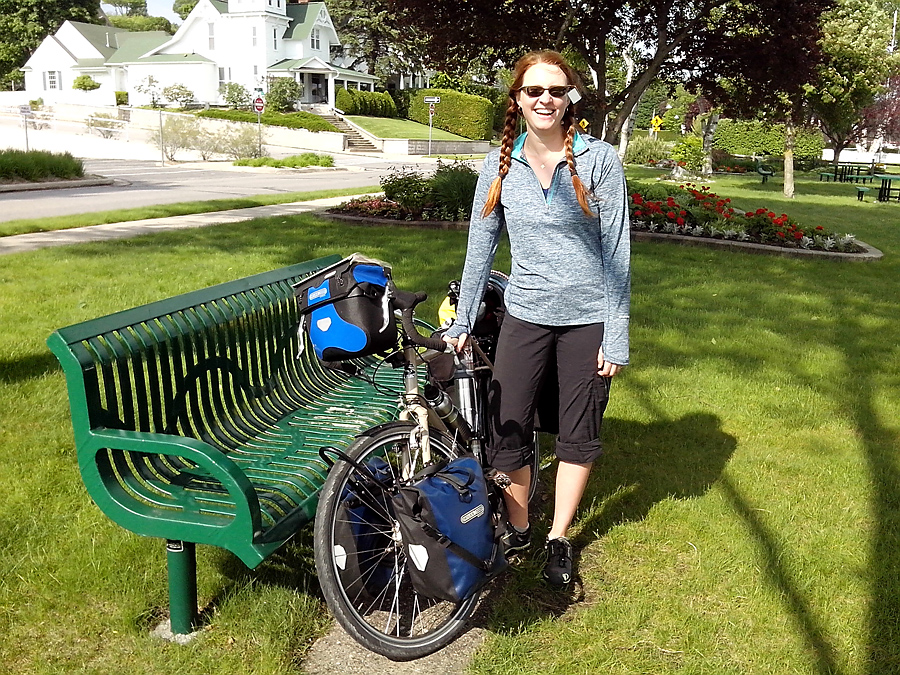 Leaving Harbor Springs, I got on the Little Travers Wheelway, 23 miles of path that links three towns on the bay, and keeps cyclists amused and off the highway.

Great riding. Did I mention that before? 🙂 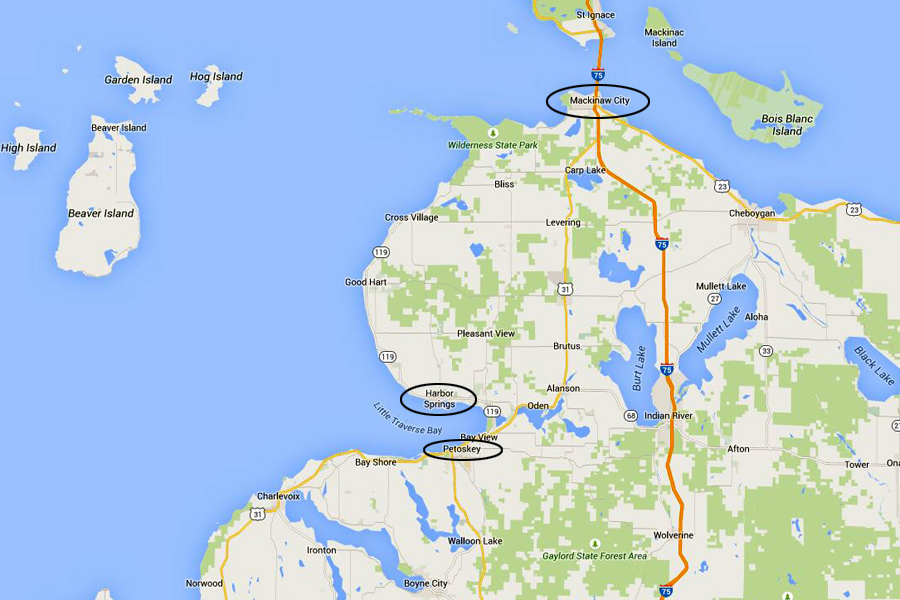