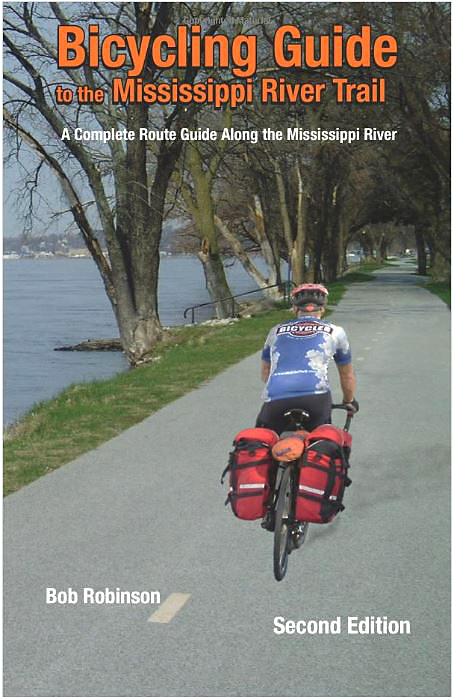 I used this book to ride the MRT self supported from New Orleans to Lake Itasca in May and June of 2014. I relied on the book to find the route, and to help find accommodation and food.

The MRT is a series of trails and back roads chosen for good bicycling, which means quiet roads in out of the way places. The route is poorly marked and often has no signs. There is no practical way to find and ride the MRT without this book.

I was a stranger to the MRT, bought the book, and followed it from south to north. It became apparent that Bob did a lot of work collecting and organizing the information he presents. The book describes the route in the text, followed by a turn by turn list of trails and roads, and a simple map for each section. It helps you find accommodation and food. The text gives explanations and adds color commentary for some of the sights along the way. This is important, since common guides and maps are designed around car travel with no understanding of the needs of the touring cyclist. If you want to ride the MRT, buy this book.

Bob’s Guidebook appears to be a one man effort, and has limitations you should plan for:

First, the maps are weak because they are small scale, show all towns as dots with no reference to size, and there is little to show where the route is in relation to adjacent towns and highways. I was faced with a thin black line and often had nothing to guide me when roads had no MRT or other signs. Once off the route, it was difficult to find the way back to it. I partly solved the problem by carrying state road maps, and putting the route in context at the beginning of each day.

State maps will show when you are heading for a larger center that has more accommodation and food options. For example, I arrived in Hamilton, IL after four hours of rain to find the listed hotel as not existing. It took a while to realize that Keokuk, a large town with several motels, is just 2 miles across the river.

Second, the book is organized into states and sections, with little cross reference. I found this confusing, because the trail goes on both sides of the river in different states. I was looking for a unified map that identifies each state and section. I also wanted to see connections to the different sections shown on the maps themselves. To make sense of things, I eventually marked river crossings on the maps and noted the related chapters. I also made a full page chart showing where each section fits into the big picture.

Third, the book is designed to be used going in either direction, but the default is north to south. As a result, I lost the route several times, going in and out of towns. For example, south of Memphis the signs for Tunica Resorts and the local bicycle paths had me lost, as did the lack of signs when entering Martyr’s park in Memphis. When leaving Memphis on the north, the lack of signs had me on 3 miles of gravel. When entering La Crosse, WI, it is impossible to see the bike path from the highway. I realized I had missed it when I passed the Wal-Mart which the author mentions in the text. In both cases I looked at the directions again, and concluded that the route from north to south would be obvious due to the street layout, but not going south to north. You will have to think for yourself in several places like this.

Fourth, Bob tries to be politically neutral and paints the route as wonderful, no matter which side of the river you choose. This is a disservice to riders, who have good reason to choose. For example, a riding companion was given strong advice by two separate local riders to avoid a long series of hills by crossing from east to west at Nelson, WI, south of Minneapolis. Bob does his usual cheerful boosting of the route, but is silent about the hills. I missed the advice of the local riders, and rode up and down wondering why the book said nothing about the terrain. I was lucky and had good weather, and enjoyed the day. On the other hand, I think I should be given the information to make an informed choice. I met riders who love the challenge of hills, but wind and rain, and a loaded bike on a tiring day make for a different set of priorities.

Finally, the book has no town maps. Bob says to always head for the info center in each large town. That is easier said than done, and these places have limited hours, so I often asked locals to get the info I needed.

I’ve used lots of Lonely Planet guides, which give you pretty well everything you need to survive and enjoy a new country. I’ve also seen highly detailed guidebooks for cycling in Europe. Bob’s book is in a different class.

Bob’s Guidebook is a basic MRT route guide, with accommodation and food information for surviving as a touring cyclist. You can use it for the whole route, or short sections. It is indispensable. At the same time, be prepared to think for yourself and supplement the guide with additional maps and the web.

The MRT is a fascinating adventure.